01. The Association shall be called 'The Essemmay Association of Former Students of St Margaret's Schools'.

02. The Association will comprise of all former students or staff of St Margaret's schools and nominated Associate Members duly elected.

04. The Association will hold the AGM not later than 30th May each year.

05. Any matters regarding amendments to the Constitution of the Association may only be discussed at the AGM and the Secretary must be advised 28 days prior to the Annual General Meeting.

06. The Association shall elect a Committee at the AGM comprising: Chairman, Vice-Chairman, Secretary, Treasurer, Social Secretary, Membership Secretary, and Minutes Secretary. The Chair or Secretary of any affiliated section should be ex officio. In addition up to 4 ordinary committee members may be elected. The School Liaison Officer shall be an ex officio member.

07. The AGM will receive the accounts of the Association for the year from the treasurer who will present these to the Committee prior to the meeting.

08. The AGM shall approve any changes to subscriptions from the affiliated sections.

09. The Committee shall meet during the year as necessary, to arrange the business of the Association.

10. The Committee shall be quorate when 5 members are present.

11. The Committee shall have authority to co-opt members during the year.

12. Any Committee member absent from 3 consecutive meetings, without good reason, will be considered to have resigned. 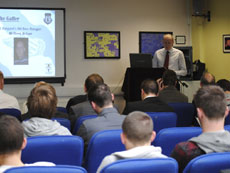