Tries from Max, Hugh, Jason and Ambler and conversions by George helped secure a comfortable victory in the Lancashire Cup Final. St Margaret's never looked like losing as they dominated in rucks and their scrumming was tough, solid and dominating.

An early score was important and St Margaret's got it when Max picked up possession and barged through the helpless Range High School defence for the first try of the game. George comfortably converted and gave SMA a 7-0 lead.

However, in their first real attack of the game they applied some pressure and the ball was passed out to the wing and a dominating run from the winger managed to find a gap and scored in the corner. Fortunately, the conversion was poor and SMA still led 7-5. The rest of the half was played out with little to talk about as SMA continued to press without much joy as RHS tackled convincingly and the half ended with the scores still 7-5.

The half-time team talk must have given SMA some extra inspiration as they came straight out and finally they got the points they deserved. Again, the ball came out of the scrum and Hugh barged through to score an excellent try. Range launched a counter attack but was stopped by a try-saving tackle from Jonathan Burrows before the ball was booted to safety.

With the score still at 12-5 Jason made an intelligent run and cut the ball out before using his lightening pace to get away from the helpless Range defence and reach the try line, George converted with no trouble and SMA were edging away, they now led 19-5.

Three more points were added soon after as SMA were awarded a penalty. It was George who again applied to add to the commanding scoreboard, 22-5.

It was SMA who added to their lead. The ball was turned over and worked over to the wing before Ambler sped home for another try.

With the final seconds ticking away one last push from RHS resulted in a consolation try as the ball was worked out of the - loaded and thus making the score more respectable.

The final whistle blew and the scenes were jubilant as a huge roar came from all of the SMA players, delighted with an amazing and well-deserved victory. 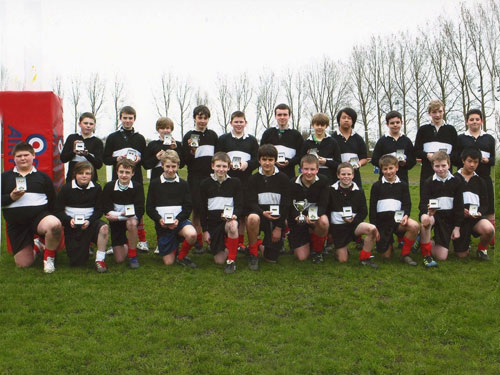