On Wednesday 23rd May, the Rt. Revd. Richard Blackburn, Bishop of Warrington, visited St. Margaret's. He was given a tour of the school, and then celebrated the Eucharist with us in our school chapel. Some members of staff, students and representatives from the church in Arkansas, USA, were present at the service.

The bishop arrived at the chapel around fifteen minutes before the service was due to start, in order to check that everything was in the right place and ready. This was a nervous moment for me, as I had set the altar up for the service. The bishop inspected the Altar with great detail. To my relief, he did go on to say "Excellent, very professional, 10/10".

During the service, the bishop blessed a banner with an image of the Revd. John Sheepshanks. Sheepshanks is a name we hear a lot in St. Margaret's, though we may not realise who he actually was. John Sheepshanks was a founder of our school, and as we all know, one of our school houses is named in honour of him. He was born in 1834, and was educated at Christ's College, Cambridge. At the young age of 23, he was ordained to the priesthood. He served his curacy at Leeds Parish Church. He then moved to Canada, where he became the Rector of New Westminster, and Chaplain to George Hills, who was the Bishop of Columbia at the time. After that, he moved back to Britain, and held incumbencies at St. Peter's Church, Bilton (Yorkshire) before moving to Liverpool to become the Vicar at St. Margaret's Church, in Anfield. During his time in Anfield, he petitioned for a school to be built for boys in the local area. St. Margaret's School was born. In 1893, the Revd. Sheepshanks became the Rt. Revd. Sheepshanks, as he was raised to the episcopate, and appointed as the Bishop of Norwich. He was consecrated on the 29th June 1893. After 17 years as bishop, he resigned from the post on the 19 February 1910, and died on the 3rd June 1912.

The newly blessed banner shows Sheepshanks in a splendid red Cope, with lots of patterns and detail, and another red robe with the same detail and patterns.

On behalf of all here at St. Margaret's, we would like to thank the Bishop of Warrington for visiting, and celebrating the Eucharist with us. It was a great joy to welcome him, and we hope that we will see him again soon. 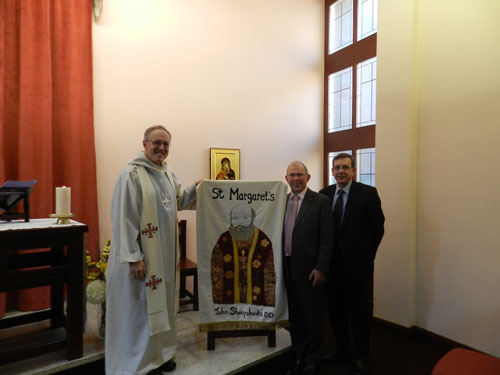