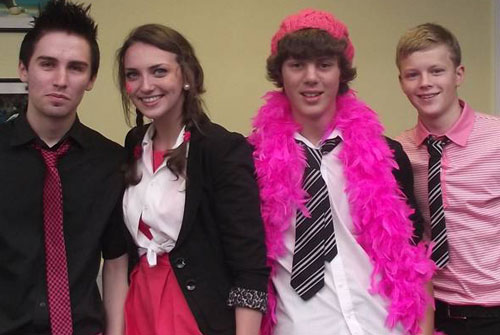 On Friday 8th October 2010, the Sixth Form was all-things pink. In order to raise funds for the “Wear it Pink” Breast Cancer Campaign, the Sixth Form were asked to wear a hint of pink with their uniform. The lads certainly seemed to enjoy themselves, getting in touch with their feminine side, so to speak.

Fay Purves organised a cake sale for break time. So with the money raised from student donations for being allowed to wear their “pink uniform”, plus the cake sale – as well as a number of donations from staff, the Sixth Form managed to raise £425 for the Breast Cancer Campaign, an achievement in which every member of the Sixth Form can take pride.