St Margaret's First XI secured a place in the Everton Shield Final on Friday 6th May with a 2-1 home victory over Tranmere Rovers Scholarship Team.

In what was a tense and close cup tie from start to finish, St Margaret's opened proceedings in a dominant fashion creating a couple of early openings with Owen and Liam going close.

St Margaret's then had a goal disallowed from Michael as they mounted the pressure. The deadlock was broken though in the 20th minute when Elliot Musa whipped in one of his trademark free kicks to find Iwan who challenged the goalkeeper fairly as he went to claim the ball, the keeper fumbled it and Iwan was there to slot the ball home to make it 1-0. A deserved lead.

St Margaret's were playing with a great intensity and could have had another as a Iwan header went just over the bar from a corner.

Tranmere hadn't really tested Matthew in the St Margaret's goal but managed to level in the 32nd minute when a defensive header fell into the path of the Tranmere forward and he slotted home to make it 1-1.

Overall it was an excellent first half from St Margaret's but it was all square.

The second half started well for St Margaret's as they looked to restore their lead, and they did so within 4 minutes of the restart when Michael went on a mazy run before whipping a terrific cross in from the right wing, met by the head of Elliot who bulleted it in from the edge of the penalty area - a brilliant header and the roar went up from the St Margaret's touchline as the watching crowd celebrated the goal. 2-1.

A fantastic move from Elliot, Michael and Owen almost resulted in Michael scoring the goal of the season with an audacious lob to end a lovely team move but it dropped just wide of the Tranmere goal. Still 2-1.

Tranmere were knocking a number of free kicks and corners into the SMA box but to no avail as they tried to get back on level terms and they were almost caught in the break as Owen crossed for Zak who was unlucky to see his header saved by the keeper.

St Margaret's continued to hang on and when the full time whistle sounded, the joy of knowing they would have a cup final to look forward to was evident from the smiles on all the SMA players' faces.

A magnificent achievement to reach a cup final, the first time that a First XI squad has done so since 2010.

Well done to every player who has played a part in the run to the final.

MAN OF THE MATCH: The Team 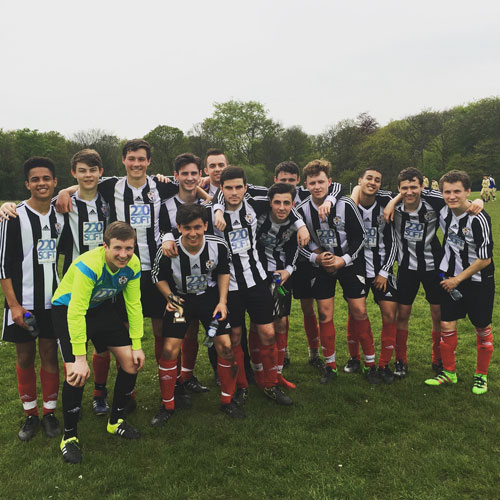 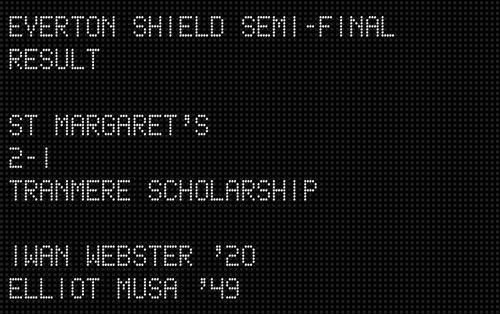