It was a losing streak that SMA needed to correct as they entered the next round of fixtures in the NDS Trophies Championship. They successfully banished that to the past, however, as they scraped past a resilient Coaching Connexions side and ran out 3-2 winners.

After three disappointing defeats in consecutive games, there was determined look about the St Margaret’s team that kicked off against Coaching Connexions on Wednesday. With the defeat in Leeds still fresh in the memory of many players, they were keen to set the record straight.

SMA were immediately on the front foot as Connexions struggle to control possession and were continuously harried and harassed by SMA all over the park. SMA themselves were full of energy when in control of the ball and could have been ahead very early on as both Perry and Liam went close early on.

It came as no surprise that SMA took the lead on 7 minutes. A Coaching Connexions free-kick was cleared away and found Zak who drove forward with the ball. He linked with Owen before eventually setting Owen away down the right hand side. He drove towards goal, cutting past two players, before firing the ball across goal. It was a superb ball and the Coaching Connexions central defender could do nothing but divert the ball into his own goal to give SMA the lead.

It was perfect start for SMA but Nick Georgiou had to be alert soon after as he got down low to parry a well struck effort onto the post before claiming it ahead of the oncoming attackers. It was Coaching Connexions’ only real chance and SMA continued to look for a second as Owen curled one just over the bar from distance.

Eventually, the breakthrough came for SMA. Neat play from Owen allowed him to get a cross in from the right side. It travelled all the way across the box and found Perry who struck a shot which was only parried by the opposition keeper. The ball found its way to Liam who slotted the ball home without hesitation and gave SMA a two goal advantage.

From a comfortable position, SMA managed to throw away their two goal lead in the space of two minutes. Firstly, a corner for Coaching Connexions was headed home by the central defender who found himself free on the edge of the 6 yard box. Then only a minute later, neat play from the winger saw him dance past three men before finishing coolly in to the top corner of the net. All of SMA’s hard work had been undone.

The SMA team were shell-shocked and it took them some time before they managed to find their feet again. They did manage to finish the half as the better team as Liam went close on two occasions. The first saw him denied by the goalkeeper before then firing over from a tight angle just before the whistle.

After half time, SMA began to restore their composure and, but for the Coaching Connexions keeper, could have been well out of sight. Luke and Owen both tested the keeper and then Jay Stuart was unfortunate not to get on the end of a teasing ball across the face of goal by Zak.

Just when it was looking like it wasn’t going to be SMA’s day, their luck changed. Zak picked the ball up on the right hand side before beating two men and advancing into the box. He fired it across goal and Owen cleverly got his body in front of the defender and was tripped. Without hesitation the referee pointed to the spot and Owen stepped up confidently to comfortably slot the ball into the bottom right hand corner, beyond the reach of the keeper.

It was the lift SMA needed and it put them back in front. Despite their best efforts, Coaching Connexions struggled to really generate any real pressure on the SMA goal. SMA themselves were looking dangerous on the counter attack and Owen went close again with a good run and shot.

With 5 minutes remaining the away side were beginning to become more dangerous as SMA dropped deeper in the hope of retaining what they had. Despite the pressure, Nick only made one save of note as he came out to block a chance but SMA managed to see out the remaining minutes and come away with a massive victory and three points.

After the game, Greg told me of his delight at getting the three points:

“It was a tough game against Coaching Connexions. We started well with our high pressing game and got ourselves into a 2-0 lead but sloppy defending meant we were pegged back. Once we got to half time at 2-2 and composed ourselves, we put in a solid, dogged second half performance and another Owen goal was the difference. It was a big three points and sets us up nicely for our game with title rivals Range High School next week.”

Man of the Match

Greg said: “Elliot has been a key player for me this season. Against Coaching Connexions, Elliot dominated the midfield with solid tackling and reading of the game. His distribution was key to us breaking down the opposition and eventually claiming a big three points!” 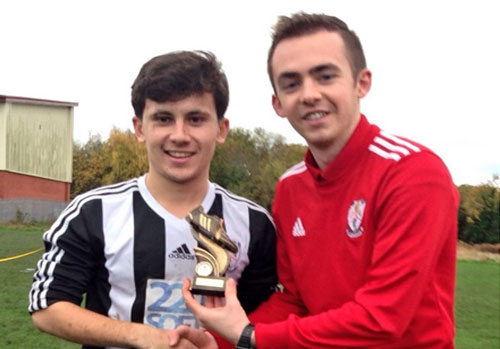