It is with great sadness that we record the passing of David Rees, School Chaplain from 1974-83. David joined St Margaret's as its second Chaplain in succession to the Rev. E.G.L. Harbourn. He arrived in 1974 a part of an influx of young staff which was gradually replacing the old guard. He quickly established himself as a well-respected and popular member of the staffroom and so it remained throughout his time at the school.

David brought was educated at St John's School Leatherhead and Jesus College Oxford. He undertook voluntary work in Nigeria before returning to train for the priesthood at Westcott House, Oxford and was ordained at Manchester Cathedral in 1964 after which he decided to go into teaching. It was while teaching at Long Eaton, Derbyshire that he met and married his wife Janet in 1974.

David brought scholarship, kindness, understanding and good humour to his role at St Margaret's and, as such, was well respected by both the boys and his colleagues. He influenced many aspects of school life and was prepared to roll up his sleeves and work alongside his students, recognising the talents and contributions of others. He combined the pastoral, spiritual and educational aspects of chaplaincy in a way that St Margaret's had not seen before. As Head of the Religious Studies Department he increased its profile as an academic discipline in its own right for O and A Level. But he will be remembered for the wit and charm that he brought to the pursuit of knowledge as a means of enjoying God. His approach to learning was something that you caught rather than were taught.

He worked hard to ensure that there was regular Christian worship and continued to develop the use of the Chapel with the weekly Eucharist on Monday and a quiet time for prayer and reflection on Thursday at lunchtime. A chapel discussion group was established with such varied topics as "spiritual warfare" Anglican Doctrine" and even one on UFOs! This later metamorphosed into "The St. Margaret's Society" and included visiting speakers. In later years other groups and societies flourished with a Bible Study Fellowship and a group interested in plainsong. The encouragement of other colleagues became important for the growth of student activities, such as the Young Believers group and students themselves took on leadership roles; for example the jobs of sacristan, organising the chapel servers' rota and leading a junior Christian Union.

As many as 20 students would be prepared for confirmation each year. The first group of boys was confirmed in November 1976 by Bishop Baker at Liverpool Cathedral as part of the West Derby Deanery Confirmation Service and included the future Canon Stephen Williams, one of the first of many St Margaret's students to be ordained.

Change is a very important feature of school life with pupils and staff arriving and departing on their way; hence the changing names for the various groups who used the Chapel. Each year David recorded his thanks and best wishes to those leaving, always confident that, given the nurture of the younger boys, there would be new leaders in the offing to take their place. In this David always displayed his calm, confident trust that the Lord would provide and accepted that his "flock" disappeared each evening to their other lives outside school.

St Annes was an important asset to the Christian life of the school as a venue for the whole School Eucharists held at the start and end of terms and at Eastertide and on Ash Wednesday and David worked closely with the Vicars of the parish. In the year before he moved to Melidon, David turned his attention to the material needs of the Chapel and led a group of sixth formers in painting and decorating the interior. Mr Dixon, the woodwork master, convereted a prayer desk into a credence table and a parent washed the altar linen. New carpet and a curtain behind the altar completed the operation. Writing in the magazine David said, "speaking for myself, I found rolling the paint on, once begun, to be a pleasant and quiet task but prefer working closed to the floor."

David was actively involved in many aspects of school life and he brought an intellectual strand to after school activities with the establishment of "The Polymaths" in the autumn term of 1975 which met on Thursday after school, once a month, in term time. It was not a formal debating society but rather an informal discussion group whereby those attending could all express their opinions on a chosen topic. Subjects discussed ranged from the House of Lords, South Africa, they function of a school, the sanctity of marriage and the supernatural. As always David's respect for others and his sense of humour smoothed the way; he possessed an energy that only Melvyn Bragg could rival today. Attended by both staff and students the Polymaths eventually expanded to include our sister schools St Hilda's and Archbishop Blanch with meetings rotating around the schools. When the 50th Polymaths meeting took place David provided sponge cakes specially baked by his wife Janet.

In 1979, the year the school centenary was celebrated, David's musical and performing talents were on display in a production of Gilbert and Sullivan's The Pirates of Penzance. David played Major General Stanley, under the able baton of Mrs Deborah Lamb, the school's Director of music, and was "the very model of a modern major general." The rehearsals were great fun for all concerned and the production was a great success. David also displayed his musical talents in the staff singing group, "the Mastersingers" which performed close harmony for the Carol services and school concerts.

On the retirement of Mr Brophy in 1977 David became co- editor of the school magazine, Essemmay, continuing the traditional house style. Always a regular contributor to the magazine with the Chapel Notes, he also added another article entitles, "A Meeting", which involved him being alone in the chapel, encountering "the boss". David's conversations with the Lord always proved interesting with the tone always slightly whimsical but with a lesson to be learned. The articles were much missed when David decided to move on.

David and Janet's decision to move into parish life at Melidon turned out to be the right one but Melidon's gain was St Margaret's loss. For 24 years he served his parish; beyond which scores of ordinands and Diocesan Readers were recipients of his wisdom, pastoral care and learning. He was made a Canon of St Asaph Cathedral in 1993 and Canon Chancellor in 1996. A member of the Hymn Society, he composed a hymn for the Cathedral which was sung at his memorial service there. This was one of many hymns he composed, including our School Hymn, "Let shine the Truth".

St Margaret's was blessed with a good and faithful servant in David Rees. He was, in the words of the Bishop of St Asaph, who presided at his memorial service, "the gentlest of gentlemen".

With acknowledgement to the contributions of Canon Stephen Williams, John Foulkes MBE and the Bishop of St Asaph. 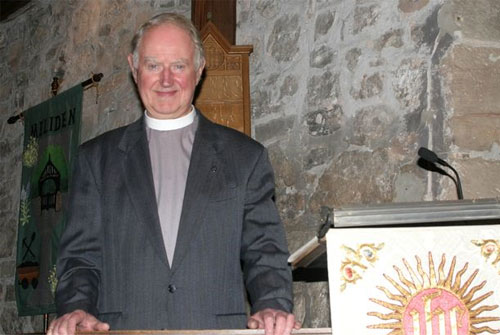