On Wednesday 9th October, Year 7 and 8 boys were invited to an exciting new theatrical production, which fused puppetry, magic and music, at the Royal Exchange in Manchester. Called Edmund the Learned Pig, it was a wondrous and darkly pleasant musical tale of a pig who taught himself to read. All the boys thoroughly enjoyed the production, kindly organised by Mrs Rimmington.

Accompanied by Mrs Pritchard, Mr Webster and Mrs Kirby the boys watched in awe as the story unravelled itself and we met some wonderful, mysterious characters. From plate spinning to magic tricks, the audience were every much as part of the production as the actors themselves. Alex, Year 7, even joined in with a mind reading trick! I wonder if he’ll be able to fore guess his homework tasks just as well! A thoroughly enjoyable evening was had by all! 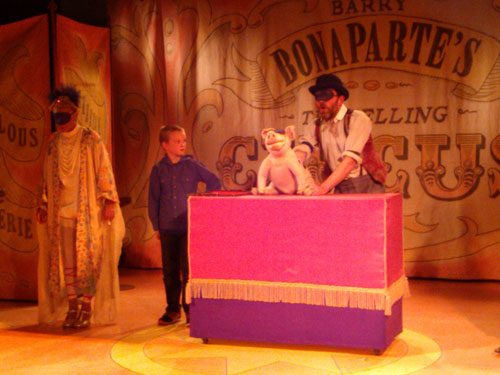