Congratulations are due to former student Stephen Boyd (1982-1989) who was installed as an Honorary Canon at Liverpool Cathedral on Sunday 23rd September 2012. Stephen left the Sixth Form in 1989 and worked as a civil servant for the Lord Chancellor’s Department.

In 1995 h3e was recommended for ordination training and spent two year studying part time before commencing residential training at Ripon College, Cuddesdon, Oxford. He was made a deacon in 2000 and ordained priest in 2001. After a period as assistant curate at St Mary Walton he served as Vicar of St. James Westbrook, Warrington; he is now priest-in-charge of St. Margaret and all Hallows, Orford, Warrington in 2009.

Stephen has also been appointed Area Dean. For the past five years Stephen has also held responsibility for newly ordained priests in the area. His wife, Cathryn works at Great Sankey High School. 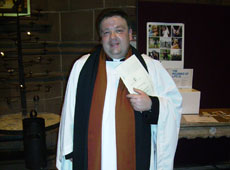