I will go Lord, if you lead me?

I will go Lord, if you lead me?

The words to one of St Margaret’s favourite hymns, I the Lord of Sea and Sky are particularly important to one old boy, Daniel Howard (2001-2008). Whilst at school Daniel first felt a sense of calling to the Priesthood in the Church of England, particularly through assisting former school chaplain, Fr Ken Miller.

After leaving Sixth Form, Daniel went to Liverpool Hope University and gained a first class degree in Theology. Since graduating in 2011 Daniel has been engaged in pastoral work in the parish of St. Cuthbert, Croxteth Park and has served as an associate chaplain at Liverpool Hope.

In March, Daniel’s vocation was tested at a rigorous three day selection conference. The following week Daniel received good news informing him that he had been recommended for training, and the Bishop of Liverpool was happy for him to proceed.

Daniel’s next step has taken him to Oxford where his now training at St. Stephen’s House, an Anglican theological college. During his training he will also undertake specialist post-graduate study through the University of Oxford’s faculty of Theology. 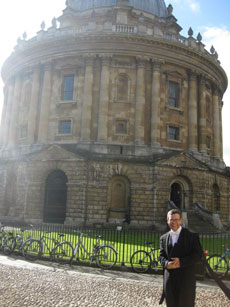